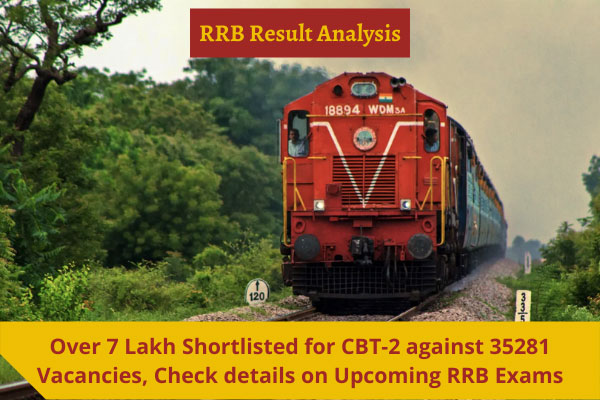 Railway Recruitment Board has released the region-wise result of the RRB NTPC CEN 01/2019 exam on January 15, 2022 on its 21 official zonal websites. Along with the result, RRB has also released cut off marks, scorecard & merit list of the RRB NTPC CBT-1 exam which was held from December 28, 2020 to July 31, 2021 in 7 phases all across the country. Candidates who appeared for the exam can check the result on the official RRB website of their respective regions. RRB NTPC CEN 01/2019 exam was conducted to fill 35281 vacancies under Non-Technical popular categories in various zones and production units of Indian Railways and more than 1.25 crore candidates appeared for the RRB NTPC exam.

RRB NTPC CBT-1 CEN 01/2019 Result Analysis
As per Centralized Employment Notification, the shortlisting of candidates for RRB NTPC 01/2019 has been done separately for each level based on options selected by candidates and their educational qualifications. Thus, the number of candidates shortlisted for CBT-2 of each level is 20 times the vacancies released for each zone. The normalized scores of CBT-1 were used for shortlisting candidates for the CBT-2 exam as per their merit. A total of 705620 candidates have been shortlisted for CBT-2 against 35281 vacancies in total.

The final result of the RRB NTPC 2019 exam will contain a list of 35281 selected candidates. No candidate will be selected for more than one post. Candidates who are shortlisted for the higher-level posts can also appear in the CBT-2 of lower-level posts.

RRB NTPC CBT-2 Exam 2019
Railway Recruitment Board (RRB) has released the exam dates for Computer Based Test (CBT-2) for RRB NTPC 2019. The second stage of RRB NTPC 2019 will be held from February 15 to February 19, 2022 in a single phase. As per the official notification released by RRB, there will be separate second stage computer-based tests held for each of the levels i.e, levels 2, 3, 4, 5, and 6 of the 7th CPC. A common CBT-2 exam will be held for all posts that fall within the same level of 7th CPC.

Upcoming RRB Exams 2022
RRB will conduct various exams in 2022 to recruit candidates in different departments and zones of Indian Railways. Following are details about some of the upcoming RRB exams in 2022.

RRB Group D
RRB Group D CBT-1 2021 exam will be held from February 23, 2022 onwards in multiple phases. The exam will be held to fill 1,03,769 vacancies announced for various Level-1 posts under different technical departments. The RRB Group D admit card will be available to download from February 19, 2022 onwards. Candidates can download the admit card from the official website of the RRB region from which they have applied.

RRB NTPC
RRB NTPC 2022 notification is expected to be released in February 2022. The application process for RRB NTPC is also expected to start from February 2022. Candidates will be able to fill out the application form till the last week of March, 2022. The RRB NTPC CBT-1 exam will be held in December, 2022 tentatively. The admit card for RRB NTPC CBT-1 will be released four days prior to the exam date. It is expected that a total of 10603 vacancies will be announced for RRB NTPC 2022.
The final selection of candidates for RRB NTPC will be done on the basis of their performance in CBT-2 and skill test (CBAT & TST). Also, candidates must pass the medical fitness test conducted by Railway Administration to be appointed under RRB NTPC.

Candidates appearing for the RRB NTPC CBT-2 exam are advised to solve sample papers and take mock tests on a regular basis. Aspirants can refer to the preparation tips shared by toppers and create an effective strategy to drive their exam preparation in the right direction. Candidates are also advised to check Prepp for useful study material, latest exam updates, previous year question papers, preparation tips by experts and many more resources.