Lucky and Rare BatsmanThat started IPL career with a Six 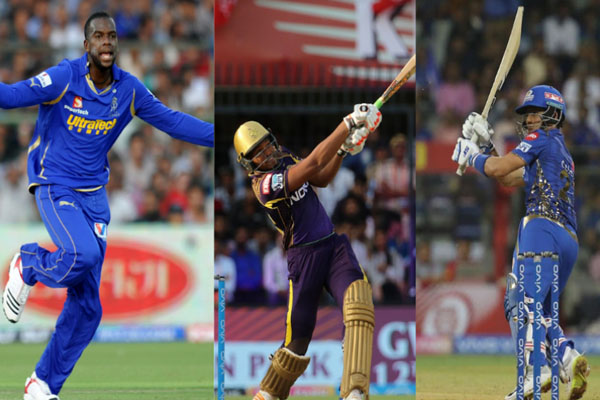 The Indian Premier League has been special for the youngster who eyes to make a debut for India at the International level. Every youngster dream to play for the country, and for that, the IPL is a spectacular platform that makes them match ready for the toughest series. IPL is also a medium that gives a player the match awareness, and it teaches them to come out of any situation of the game.

The IPL cap which the players receive is cherished for many days. It is the most favourite moment for the players when their dreams come true. It is not easy to start a career by hitting the first ball for six. If a player accomplishes that feat, then he is a special player who has immense talent.We all never expect that and give those players priority in dream11 prediction.
Cricket is a pressure game, and when the player plays the first match at any level and the pressure mounts. The pressure in IPL is no different. Many players do not get the chance to play because they do not name the playing XI. But those who got the opportunity had to wait in the dressing room and see the others perform. Despite all those pressures mounting stuff, some players have gone on to hit the first delivery into the stands.

In today's article, we shall let our IPL fans know about those three players who smashed the first delivery for Six in their debut game of this cash-rich league tournament. Today, the IPL 2021 season starts with a clash between Mumbai Indians and Royal Challengers Bangalore in Chennai. They will broadcast the first IPL 2021 match on the Star Sports Networks, and the live streaming will be available on HOTSTAR, Ten Sports, and Live Cricket TV app from 7.30 PM IST.
Kevon Cooper
Kevin Cooper is the first name on this list, who had hit the first ball for six on his IPL debut. Copper was the permeant feature of the Double R's camp from 2012 to 2014. He made his debut against the Kings XI Punjab at Jaipur, and he smashed the first delivery for six in 2012. Kevin was a hard-hitting bowling all-rounder.
He provided some lusty blows towards the end of the innings, and he was also good with the ball. Kevin used to bowl good Yorkers, and he had a lot of variations that would deceive the batsmen. He was picked because of his good performances in the IPL. Cooper has played for many T20 leagues worldwide, and his career in this cash-rich league tournament was not bad.


He had picked up 33 wickets in 25 IPL games with an average of 22.94. In the IPL, his best bowling figure is when Cooper took four wickets and gave away 33 runs. He has turned some matches for the Royals, and they also reported him for suspected action. Now Cooper is playing the Caribbean Premier League for Trinbago Knight Riders.


Siddhesh is the second player to smash his IPL career's first delivery for a six. Siddheshplays for Mumbai in the domestic circuit, and he has played for two IPL franchises in his career so far. Siddheshhas had a long domestic career, and Mumbai Indians picked him up. But he had to wait till the IPL 2019 season to make his debut in the IPL. The MI skipper Rohit Sharma made way for Lad because of the injury to Hit Man. Lad started his IPL career with a six. But he scored just 15 runs. In IPL 2020, they transferred Lad to Kolkata Knight Riders. Now it remains to be seen if Siddheshcan prove his worth for KKR.


Many players have faded away after a promising start in their IPLand International careers. The above two players are in the same bracket as Javon Searles. Javon had played the IPL 2018 edition for Kolkata Knight Riders, and he is the third player on the list to hit the first ball into the stands on his IPL debut game.


Javon achieved this feat against the Kings XI Punjab franchise. KKR brought Javon as the replacement for their overseas stars. But later, he faded away after a promising start to his IPL car

er. He was an all-rounder who was known for his lovely shots during the middle overs. Now Javon plays the Caribbean Premier League. He is with Trinbago Knight Riders. But the KKR franchise released him, and he doesn't look to make a comeback into this cash-rich league tournament again.