हिन्दी / English
Home » English » Picture News » Where And How Much Did The Cyclone Tauktae Affected India: SEE FULL REPORT
1 of 2

Where And How Much Did The Cyclone Tauktae Affected India: SEE FULL REPORT 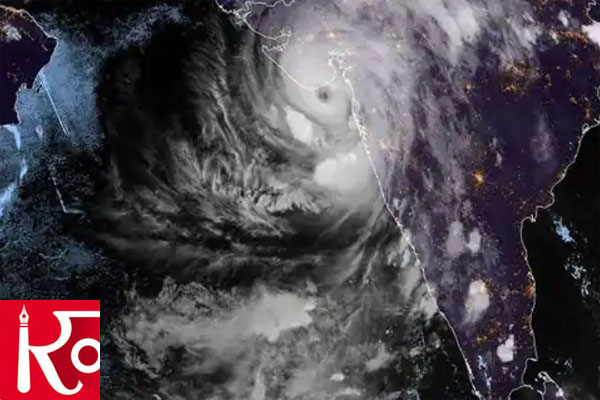 Extremely severe cyclonic storm Tauktae weakened after making landfall on the Gujarat coast. According to the India Meteorological Department (IMD), the storm was moving at a speed of 11 kmph through Saurashtra, Gujarat at 5.30 am. The weather department predicted that it will turn into a severe cyclonic storm by 11 am, and heavy rainfall was expected in parts of Saurashtra, Kutch, Konkan today.

Eight people have lost their lives so far in the cyclone Tauktae-hit coastal and surrounding Malnad districts of Karnataka, officials said on Monday.
According to a situation report by Karnataka State Disaster Management Authority officials, till this evening, 121 villages in seven districts of Dakshina Kannada, Udupi, Uttara Kannada, Kodagu, Chikkamagaluru, Hassan, and Belagavi have been affected by the cyclone.Among the 121 villages affected, a maximum of 48 are from Uttara Kannada district.

The cyclone Tauktae has affected Rajasthan also, the MET department has issued an alert for four days in the state, while a red alert has been issued for the next two days for the south and south-western districts.
Several districts of the state- Sirohi, Dungarpur, Banswada, Bheelwada, Kota has received heavy rainfall due to cyclone.

Four people were killed in Gujarat as cyclone Tauktae pounded parts of the state and left behind a trail of destruction along the western coast, officials said on Tuesday.
Cyclone Tauktae, the biggest to hit the region in decades, made landfall in Gujarat at around 8.30 pm on Monday, packing winds with speeds of 155-165 kilometers per hour, gusting to 190 km/hour. After the landfall ended around midnight, the weather office downgraded the storm from 'extremely severe' to 'very severe'. It later said in a tweet that the cyclone was weakening further.Diu, near Gujarat, witnessed winds with speeds up to 133 kilometers per hour and waves as high as three meters. The Gujarat government had shifted over a lakh people living in coastal areas to safer places after the India Meteorological Department issued warnings of tidal waves and flooding. The weather office said an extremely heavy downpour over the southern districts of Saurashtra and Diu is expected on Tuesday as well. It has issued an orange alert for heavy rains in Madhya Pradesh. Some parts of Uttar Pradesh may also receive rainfall.

The Gujarat government has deployed teams from several departments to provide rescue and relief. Special arrangements have been made in hospitals treating COVID-19 patients to ensure uninterrupted electricity. Hundreds of ambulances have been kept on standby to shift patients in cases of emergency, news agency PTI reported.


Six people died and nine were injured as the storm brushed past Maharashtra. Chief Minister Uddhav Thackeray took a review of the damage caused by the cyclone. His office tweeted that vehicular movement was being restored after removing trees and electric poles that fell due to gusty winds.

Mumbai on Monday witnessed the highest-ever wind speed of 114 kilometers per hour. Heavy rainfall pummelled the city as well. Flight operations were suspended for hours. The Bandra-Worli sea link also remained shut for traffic because of strong winds, which damaged many structures in the city. Waterlogging was also reported from low-lying areas.


National Disaster Response Force chief SN Pradhan told on Monday that doctors and medical staff had been sent to the affected states along with 100 rescue and relief teams. Only Covid-vaccinated personnel were deployed, he added. The teams are equipped with machines that can cut through fallen trees. In cyclone shelters, social distancing and other anti-Covid rules are being enforced.