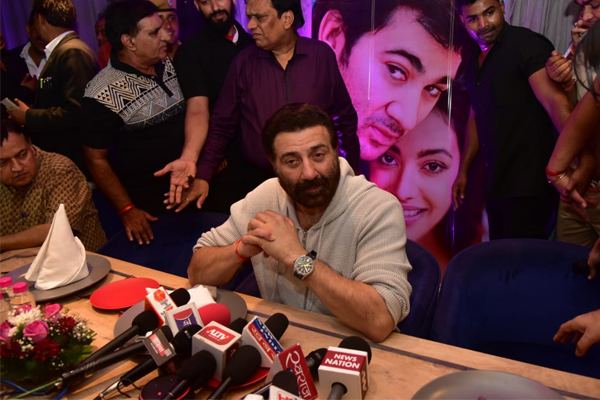 Jaipur: Bollywood actor Sunny Deol, along with his son Karan Deol and actress Saher Bamba visited at Jaipur on Wednesday for the promotion of upcoming film Pal Pal Dil Ke Paas. Sunny is excited about the launch of son Karan in Bollywood and is meeting people with him across the country. Sunny Deol inaugurates the Robot restaurant at Shree Gangour Sweets Jaipur.

Automated restaurant or robotic restaurant is a restaurant that uses robots to do tasks such as delivering food and drinks to the tables and/or to cook the food. Restaurant automation means the use of restaurant management system to automate the major operations of a restaurant establishment. Customers ordered their foods directly through the machines.

Pal Pal Dil Ke Paas is an upcoming Indian Hindi-language romantic drama film directed by Sunny Deol and produced by Sunny Sounds Pvt Ltd and Zee Studios. The film is scheduled for release on 20 September 2019. Karan Deol and Sahher Bambba were cast for the lead roles. Over 400 girls were auditioned for Sahher's role. It is first movie of Sunny Deol's Son Karan Deol.