Russian Made Sputnik V Vaccine To Be Priced At Rs 995 Per Dose In India, 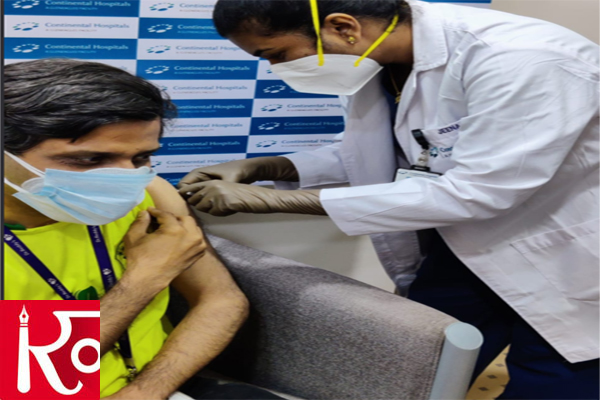 Dr. Reddy's Laboratories on Friday said as part of a limited pilot, the soft launch of the COVID vaccine Sputnik V has commenced and the first dose of the vaccine was administered in Hyderabad.

The first consignment of imported doses of the Sputnik V vaccine landed in India on May 1, and received regulatory clearance from the Central Drugs Laboratory, Kasauli, on May 13, 2021, it added.

"Further consignments of imported doses are expected over the upcoming months. Subsequently, supply of the Sputnik V vaccine will commence from Indian manufacturing partners," it added.

The imported doses of the vaccine are presently priced at a maximum retail price of Rs 948, with 5 percent GST per dose, with the possibility of a lower price point when local supply begins, it added.

The Company is working closely with its six manufacturing partners in India to fulfill regulatory requirements to ensure smooth and timely supply. Dr. Reddy will work closely with stakeholders in the Government and private sector in India to ensure the widest possible reach of the Sputnik V vaccine as part of the national inoculation effort. This is a reaffirmation of the Company's commitment to exploring every avenue in the fight against the Covid-19 pandemic in India.

The vaccine is likely to be available in the market from next week, the Centre had said on Thursday as the vaccine shortage in various states deepened and restrictions were brought in for vaccination.

The first consignment of imported doses of the Sputnik V vaccine landed in India on May 1, after it was cleared for emergency use in India on April 13.

At 91.6 percent, Sputnik V has a higher efficacy compared to the two Covid vaccines that are currently being administered in India: Oxford-AstraZeneca's Covishield, manufactured by the Serum Institute of India, and Bharat Biotech's Covaxin.

Writing in the medical journal The Lancet, scientists involved in a peer-review of the vaccine have said, ''Notwithstanding the previous issues and lack of transparency, the interim results from the phase 3 trial of the Sputnik V vaccine again raise serious concerns.''

The allegations were countered by Russian scientists in another piece in The Lancet. The scientists said, ''Clear and transparent regulatory standards exist for the provision of clinical trial data.''

Sputnik V is one of only three vaccines in the world with such a high efficacy rate, after Pfizer and Moderna vaccines. The two-dose vaccine also has the most authorizations granted globally. Priced at less than $10 per dose in international markets, the vaccine has already been administered to more than 20 lakh people worldwide.

The Sputnik vaccine is available in both liquid and powder form. The liquid form needs to be stored at minus 18 degrees. For the powder form - which can be kept between two and eight degrees, stability tests are ongoing.