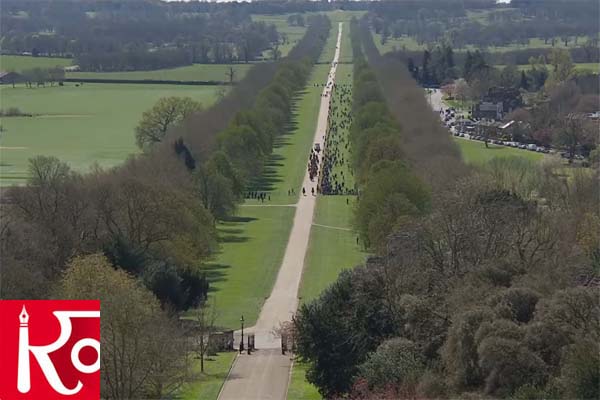 Prince Philip, the late husband of Britain's Queen Elizabeth II, will be laid to rest today at (1130 GMT)  in an intimate service attended by 30 people including members of the royal family.
Philip, also known as the Duke of Edinburgh, died at the age of 99 on April 9 in Windsor Castle. He was the nation's longest-serving consort -- the name used to describe the spouse of a reigning monarch -- and had been married to the Queen for 73 years.
His death has left a "huge void" in the "stoic" Queen's life, her son, Prince Andrew has said.

The funeral will be a "profound" moment for the Queen to say goodbye to "someone to who she was married for 73 years," Justin Welby, the Archbishop of Canterbury.
"She's the Queen, she will behave with the extraordinary dignity and extraordinary courage that she always does," Welby, who will be making a blessing at the funeral service, said.
The service will be a muted affair, by royal standards, and will take place at St. George's Chapel, which lies within the grounds of Windsor Castle, at 3 p.m. local time (10 a.m. ET).
Guns will be fired at one-minute intervals and the curfew tower bell will toll ahead of the funeral service, while a national minute's silence will mark its beginning.
Inside the chapel, all members of the congregation will wear a face covering, as dictated by public health rules.

The duke was intimately involved in planning his funeral service, selecting the music, and making sure the ceremony reflects his military affiliations and personal interests.
The service will be conducted by the Dean of Windsor, the Right Reverend David Conner, and the archbishop of Canterbury Welby and is expected to last for 50 minutes. Among the readings will be Ecclesiasticus 43 and John 11.

A four-person choir accompanied by the organ will sing pieces selected by the duke, including Benjamin Britten's "Jubilate in C," a piece he commissioned for the St George's Chapel Choir. In line with the coronavirus restrictions, the congregation will not sing along with the choir.
The choir will also sing an adaptation of Psalm 104, which the duke requested to be set to music by William Lovelady. The piece was sung at a concert celebrating Prince Philip's 75th birthday.

The Dean will then give the commendation and the duke's coffin will be lowered into the Royal Vault, where many members of the royal family have been laid to rest. The vault, set beneath the chapel, was built by George III, who is one of several kings buried within.
The vault will not be Philip's final resting place. When the Queen dies, he will be transferred to the King George VI memorial chapel to lie next to her.

At the duke's request, the end of the funeral service will be marked by the Buglers of the Royal Marines sounding "Action Stations," an announcement that would traditionally be made on a naval warship to signify that all hands should go to battle stations.
The archbishop of Canterbury will then pronounce the Blessing. The ceremony will then conclude with the national anthem. Read More...