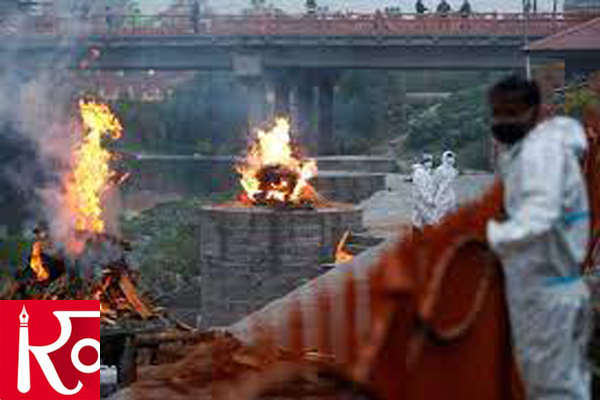 In Nepal, a situation is unfolding that looks chillingly familiar.
Covid-19 cases are skyrocketing, hospitals are overwhelmed, and the country's Prime Minister is pleading for help from other nations.
Nepal is now reporting about 20 daily Covid-19 cases per 100,000 people about the same number as India was reporting two weeks ago

Last weekend, 44% of Nepal's Covid tests came back positive, according to government figures quoted by the International Federation of Red Cross and Red Crescent Societies (IFRC), as it warned of an impending crisis.

"What is happening in India right now is a horrifying preview of Nepal's future if we cannot contain this latest Covid surge that is claiming more lives by the minute," Nepal's Red Cross chairperson, Dr. Netra Prasad Timsina, said in a statement.
The virus's rapid spread has raised fears Nepal is teetering on the brink of a crisis just as devastating as India's if not worse.
Nepal has a fragile health system, with fewer doctors per capita than India, and a lower vaccination rate than its neighbor. The country's high test positivity rate suggests it isn't catching nearly enough cases.
Mass public events, including festivals, political gatherings, and weddings, have allowed cases to spread, along with general public complacency and slow government action.
"The situations are worsening day by day and it may go out of control in future," Dr. Samir Adhikari, a spokesperson for Nepal's Ministry of Health and Population, said Monday.

Although Nepal has tightened borders and imposed lockdowns in its worst-hit regions -- including the capital -- some fear that won't be enough to contain the virus as it spreads through the capital, and even as far as Everest Base Camp.
Shops closed during the first day of lockdown in Kathmandu, Nepal, on April 29, 2021.


Only a month ago this Himalayan nation of 31 million people was reporting about 100 cases a day. Now, it's more than 8,600.
Some have blamed that on India's raging second wave spilling over into Nepal, which shares a long, open land border with its neighbor.
Nepalis don't need to show their passport or ID card to enter their country, and many Nepali people have businesses in India, and vice versa, meaning cross-border traffic is high. In recent weeks, some Indians have fled their country's second wave, hoping to access health care in Nepal or escape to a third country, Adhikari said.
"It's very hard to stop all the mobility between the two countries," he added.

In recent days, Nepal tightened those rules. Nepali citizens can now only cross from India at 13 out of 35 border points, according to Nepal's Foreign Minister, Pradeep Kumar Gyawali.
But returnees need to be tested at the border, according to Shankar Bahadur Bista, assistant chief district officer of Banke district, which borders India.
Anyone who tests negative can go home -- but positive cases must enter a quarantine facility or hospital, he added.
However, Dr. Sameer Mani Dixit, a Nepal-based public health research scientist, says those measures came too late -- the virus was already spreading within the country.


Nepal's crisis began building in early April, as the country's Prime Minister K. P. Sharma Oli touted yet another unproven coronavirus remedy.
Oli said the illness could be treated by gargling with guava leaves, adding to his ridiculed comments last year that Nepalis had stronger immune systems due to their daily intake of spices.

As April progressed, Nepalis gathered for religious festivals at home and across the border in India, where Nepali devotees joined Hindus who bathed in the Ganges for Kumbh Mela, one of the world's biggest religious gatherings.
They included Nepal's former King Gyanendra Shah and Queen Komal Shah, who was admitted to the hospital with Covid-19 on their return to Nepal, according to a statement from Norvic International Hospital in Kathmandu.

Around the same time, thousands of Nepalis gathered in the capital to celebrate the major religious festival Pahan Charhe. Others came together in Bhaktapur, a nearby city to celebrate Bisket Jatra, despite authorities ordering them not to, according to local media. One placard in support of the event read: "Our festival is dearer than our lives to us."
Nepali devotees observing the first day of the Biska or Bisket Jatra at Taumadi, Bhaktapur, Nepal on April 10, 2021.
On April 24, when the country reported more than 2,400 new cases, media clustered around Oli as he inaugurated a new Dharahara, to replace a tower destroyed in the deadly 2015 earthquake.

Five days later, on April 29, when daily cases had doubled to more than 4,800, the government imposed a two-week lockdown in the capital. The following day, the Ministry of Health and Population admitted it was overwhelmed.
"As the number of infections has increased beyond the control of the health system, it has become tough to provide hospital beds for care," the ministry said in an April 30 statement.Oli said Monday the virus had taken off in Nepal despite the government's "utmost effort" to contain it.

"Since we are living in an interconnected and interlinked world, pandemics like this spares no one and no one is safe," he said, speaking in English.
Prime Minister KP Sharma Oli inaugurates a newly constructed Dharahara in Kathmandu, Nepal on April 24, 2021.
The lack of government action has angered people in Nepal.
Experts say, while it might not have been possible to prevent a second wave, the government could have done more to control it.

Political analyst Surendra Labh said it was inappropriate to let festivals go ahead -- and argued that such events, along with wedding ceremonies, had worsened the outbreak."I think the government is not handling the outbreak well ... the government is more focused on its politics," he said.
Health expert Suresh Panthee, one of the founders of the Sustainable Study and Research Institute in Nepal, said Nepal grew complacent after avoiding a catastrophic outbreak during the first wave.
As cases rose across the border, Nepal could have prepared a quarantine system for returning citizens, he said. "We had enough time but we didn't prepare."


Nepal is one of the poorest countries in the world -- and that is reflected in its healthcare system.According to the government's Covid-19 response plan from last May, the country only has 1,595 intensive care beds and 480 ventilators for its about 30 million people.

It also has a shortage of doctors, with just 0.7 physicians per 100,000 people, according to World Bank data less than India's 0.9. Health workers on long-term leave are being called back to help manage the crisis, while the Nepal Army directed retired medical staff Wednesday to stand ready to be recalled.

As of Saturday, there were hospital bed shortages in 22 of the country's 77 districts, according to Nepal's Health Emergency Operation Center (HEOC).
Relatives of a person who died of Covid-19 mourn at a crematorium in Kathmandu, Nepal, on April 30, 2021.
Dr. Paras Shrestha, a senior physician at a Covid-19 ICU ward in the border city of Nepalgunj, says his hospital is so overrun he's advising patients with mild symptoms to isolate at home.The situation in the city is already "critical", according to Dipak Shrestha, the chief of UNICEF's Nepalgunj field office, who warned the same could happen elsewhere.

As India is battered by its brutal second wave, the Nepal government appears to be taking action.
Last week, it ordered 20,000 oxygen cylinders from overseas, as demand for medical oxygen tripled, according to Health Ministry spokesperson Dr. Jageshwor Gautam.
And on Tuesday, Nepal's army began expanding health care facilities in a border area with India, to cater to the large numbers of Nepali workers returning home.
A 200-bed isolation center is being added, along with 2,000 beds, to a facility in Sudurpashchim Province, where officials are reporting a shortage of oxygen gas cylinders.
But the challenges are vast.
Nepal has around double the positivity rate of India, suggesting a large number of cases are going undetected.


Nepali men in personal protective suits cremate the bodies of Covid-19 victims near Pashupatinath temple in Kathmandu, Nepal, on May 3, 2021.
Testing has been upgraded since the start of the first wave -- the country initially sent tests to Hong Kong for processing but upgraded to around 20,000 tests a day.
It's still not enough, Panthee said.
There are signs of underreporting at Base Camp, where two sources told CNN there had been dozens of suspected Covid-19 cases in the past few weeks. A spokesperson from Nepal's tourism department denied there had been any cases.

On top of that, Nepal has a low vaccination rate. As of the end of last month, 7.2% of the population had received at least one vaccine dose -- lower than India, where about 10% of the population has been at least partially vaccinated.
"I can say the government is trying its best," said Adhikari, from the health ministry. "But we have a very weak and fragile healthcare system in the country."


The next few weeks will be crucial in controlling Nepal's outbreak.
Last Thursday, authorities imposed a two-week lockdown in Kathmandu but before that went into force, some migrant workers returned home.

Villages often have large numbers of elderly people and limited health care raising fears that migrants might have spread the virus to remote areas. It's too early to say whether the pre-lockdown migration will lead to another spike, Adhikari said.
"Within weeks, our situation will be bad. But we are trying our best," he said.

Nepali people arrive at a crowded bus station to buy bus tickets to go back to their villages a day before lockdown in Kathmandu, Nepal, on April 28, 2021.
Authorities are taking other measures to limit the spread. From May 6, all international flights will be banned, Oli said in a televised address to the nation Monday. Rules restricting gatherings are in place in 46 of 77 districts.

Shrestha, the Nepalgunj physician, hopes if people follow the rules and stay patient, the cases will come down.
But Dixit says the rules are often changing, making it difficult for the public to abide by them. A lockdown alone isn't enough, says Panthee. The government needed to test all close contacts, isolate positive cases, better manage the border, and increase its oxygen supply.

And these lockdowns come at a cost. Gita Kuchikar, a 45-year-old cleaner, and mother-of-three in Kathmandu lost her job because of the city's lockdown and worries about her children's education.
"I feel scared because, in Nepal, cases are increasing like in India," she said. "I don't know how our government will handle the situation."

Nepalis queue for vaccine doses at Alka Hospital, Lalitpur, Nepal on April 22, 2021.
In the coming weeks, more festivals are approaching. Rato Macchidranath festival is due to start later this month near Kathmandu, although organizers said they will adopt social distancing measures and compulsory mask-wearing, according to state media.

Gautam, from the health ministry, predicted people might not follow curfew and lockdown orders due to the celebrations.
"Some festivals are coming up during this prohibitory period as well, but the government is not in the condition to say anything," Gautam said, adding that the situation is now in the hands of the Nepali people.

"We are tired of telling people to follow the safety measures."