JOE BIDEN WOULD CONSIDER SANCTIONS AGAINST TALIBAN -DEPENDING ON CONDUCT 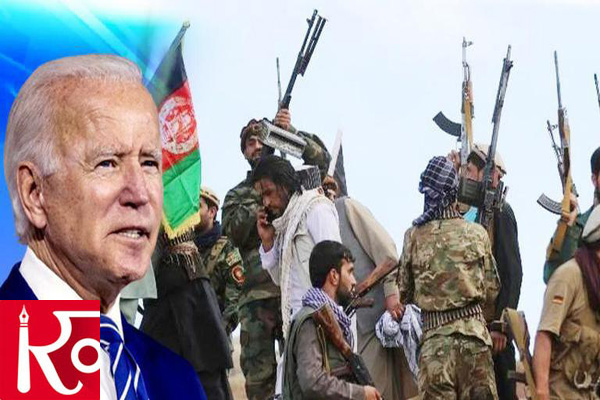 US President Joe Biden on Sunday refused to rule out possible sanctions against the Taliban after the group's takeover of Afghanistan last week. Biden said, "it depends on the conduct" of the terrorist group which has given several assurances after forcefully replacing the democratically elected government in Kabul. "The answer is yes. It depends on the conduct," Biden told reporters in Roosevelt Room when asked if he would support sanctions against Taliban under certain conditions.

Biden also said that he is discussing with US military officials about possibly extending the evacuation mission beyond the August 31 deadline. "Discussions are going on among us and the military about extending, our hope is we will not have to extend," Biden said during a press conference at the White House.

Biden asserted, without a full explanation, that U.S. forces have managed to improve access to the airport for Americans and others seeking to get on flights. He suggested that the perimeter had been extended, widening a “safe zone.”

“What I’m not going to do is talk about the tactical changes we’re making to make sure we maintain as much security as we can,” he said. “We have constantly, how can I say it, increased rational access to the airport, where more folk can get there more safely. It’s still a dangerous operation but I don’t want to go into the detail of how we’re doing that.”

In his address, Biden also assured that the US-led evacuation of Americans, at-risk Afghans, and others from the Kabul airport is accelerating, and was especially visible this past weekend. Since August 14, one day before the Taliban entered Kabul, the airlift has evacuated 28,000 people, Biden said. He said that included 11,000 who had departed from Kabul in 36 hours this weekend, but he did not provide details. The number appeared to include flights by charter and non-U.S. military aircraft as well as the U.S. Air Force C-17 and C-130 transport planes that have been flying daily from the capital. The U.S. military is controlling air traffic on both the civilian and military sides of the airport.

Terming the evacuation from Afghanistan the 'most difficult and largest airlift' ever in the history, Biden on Friday had assured to get all Americans and allies out of the war-torn country. "Kabul evacuation is among the largest and most difficult airlifts in history," Biden had said.

He added that it's time to end the Afghan mission and get all Americans out as Afghanistan has been taken over by the Taliban after the collapse of the government on Sunday.

Earlier on Sunday, US National Security Adviser (NSA) Jake Sullivan said that Washington will provide a prompt and "forceful" response to the Taliban in case the group hinders evacuation operations from the Kabul airport.

"If in the end Americans are blocked from getting to the airport, blocked from leaving the country or our operations are disrupted or our evacuations are in some way interfered with, we have explained to them (the Taliban) that there will be a swift and forceful response," NSA Sullivan had said.
SOURCE-ANI, AP