हिन्दी / English
Home » English » Picture News » Israeli Forces Joins In Offensive Against Hama : Is There Going To Be A War? SEE REPORT
1 of 1

Israeli Forces Joins In Offensive Against Hama : Is There Going To Be A War? SEE REPORT 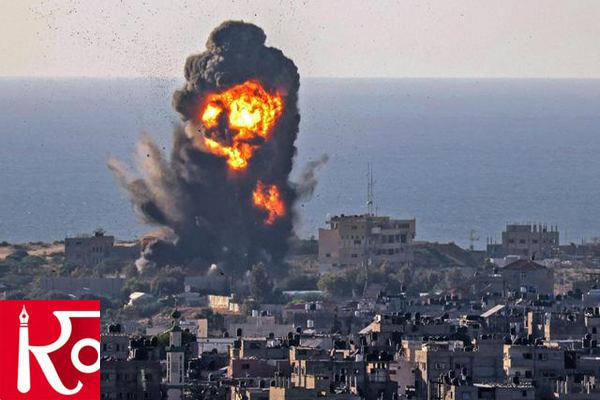 Israeli air and ground troops launched a blistering assault on the Hamas-run Gaza Strip, sweeping aside international appeals for de-escalation after four days of aerial bombardments failed to quell the heaviest militant rocket fire yet on Israel from the Palestinian enclave.

Prime Minister Benjamin Netanyahu has been warning that an extended campaign was in the offing. The decision to escalate early Friday with heavy aircraft, tank, and artillery fire came at a uniquely sensitive time, as Israel grappled with the worst outbreak in years of violence between Arabs and Jews inside its borders.

Trouble loomed on another front after three rockets launched from Lebanon crashed into the Mediterranean off Israel's northern coast late Wednesday, raising the specter of a second battleground with Iran-backed Lebanese Hezbollah militants.

"I said that we will exact a very heavy price from Hamas," Netanyahu wrote on Facebook, referring to the militant group. "We are doing so and will continue to do so with great force. The last word hasn't been saying and this campaign will continue as long as necessary."

The deaths and devastation from the fighting mounted on Thursday. More than 100 Palestinians and seven Israelis have been killed and hundreds of buildings across Gaza were damaged or in ruins. An envoy from Egypt, which traditionally has been involved in ending Israel-Gaza violence, arrived to talk to both sides as part of a broader international effort to put an end to the conflict.
The United Nations Security Council has scheduled an emergency meeting on the conflict for Sunday.

The fighting erupted on Monday as rivals of Netanyahu, the country's longest-serving prime minister, were trying to form a government to unseat him. He was handed a lifeline when a crucial prospective partner pulled out of coalition negotiations, citing the clashes.

The conflict threatens to deteriorate into an all-out war that could draw in other regional players. "It will take more time to restore calm," Netanyahu said Thursday, as the military was authorized to call up 9,000 more reservists and readied scenarios including a possible ground incursion.
"Ground forces are ready and are studying the terrain," military spokesman Brigadier-General Hidai Zilberman told Army Radio. "We'll activate them when we deem it appropriate."

President Joe Biden defended the Israeli government's response to Palestinian rocket barrages, saying he has not seen a "significant overreaction."
"The question is how we get to a point where -- they get to a point where there is a significant reduction in the attacks, particularly the rocket attacks that are indiscriminately fired into population centers," Biden told reporters at the White House.

Gaza militants fired a volley of rockets toward Ben-Gurion International Airport late Thursday, but no hits were reported there.
Schoolchildren clean out debris from a damaged Yeshiva classroom, following overnight protests in Lod, Israel, on Wednesday
Israel and Gaza have skirmished repeatedly since Hamas took control of the territory in 2007, and have fought three wars, the last seven years ago.

The current round has roots in tensions that have been festering since the beginning of the Muslim fasting month of Ramadan in April. Israeli restrictions on gathering at a traditional Ramadan meeting place outside Jerusalem's Old City touched off the unrest, but after they were lifted, protests were rekindled by the threatened evictions of Palestinians from longtime homes in the eastern sector of the city that Israel captured from Jordan in 1967. The Palestinians and much of the international community consider East Jerusalem occupied territory.

Pedestrians pass burned-out automobiles following overnight protests in Lod, Israel, on Wednesday,
The fighting in Gaza has spilled over into communal clashes inside Israel, where decades of pent-up grievances and nationalism have exploded into rampages by Arabs and Jews.

Street battles have spread across the country, with marauders attacking people, synagogues, businesses, and vehicles. On Wednesday, a Jew and an Arab were savagely beaten, and a second Jewish man was stabbed. Border police reservists were called up to reinforce police in mixed Arab-Jewish towns, but rampages resumed in multiple areas late Thursday, with a policeman shot by Arab rioters, a Jewish family attacked after entering an Arab town by accident, and a synagogue set afire, Israeli media reported.

The communal strife has torn at the uneasy coexistence between Israeli Arabs and Jews. The unresolved Israeli-Palestinian conflict, government policies that disfavor Arab citizens, Jewish and Arab nationalism, and revenge attacks have all dovetailed at this moment.
The U.S. State Department has issued a travel advisory, suggesting that Americans "reconsider travel to Israel due to armed conflict and civil unrest." The advisory also warned against travel to Gaza.

While Israel Arabs, who account for about a fifth of the population, enjoy equal rights on paper, their communities don't receive the same level of government funding, leading to poorer roads, schools, and health services.

Israel's political paralysis after four inconclusive elections, and the emboldening of Jewish ultranationalists through their recent election to parliament, have also played a role.
"This is the result of long-term simmering of discrimination and all kinds of grievances," said Avraham Sela, a Hebrew University political scientist. "It also has a lot to do with the state of Israel and its current political situation. For the last few years, we have lost the impact of functioning leadership."