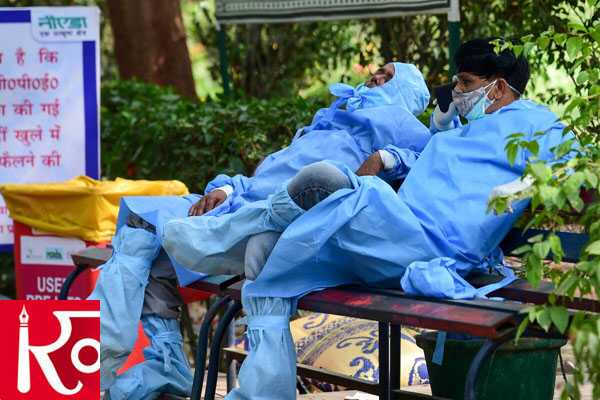 The Supreme Court has told the center to make sure the deficit of oxygen supply in Delhi is rectified by midnight. Shortage of medical oxygen has worsened the Covid crisis in the national capital with hospitals sending desperate appeals - on social media - nearly every day.

"We would seriously urge the Central and State governments to consider imposing a ban on mass gatherings and super spreader events. They may also consider imposing a lockdown to curb the virus in the second wave in the interest of public welfare," the top court said on Sunday.Haryana, Punjab, and Odisha on Sunday announced fresh restrictions to check Covid spread. A strict one-week lockdown has been announced in Haryana while Odisha has announced a two-week lockdown.

Punjab has said a Covid negative report will be necessary for those entering the state via air, rail, or road. Cinema halls, bars, and gymnasiums are to be shut and no dine-in is allowed in restaurants.

The government on Sunday said foreign missions should not hoard oxygen and other essential supplies. The directions came as at least two of them turned to the opposition Congress for help.AIIMS chief Dr. Randeep Guleria said India's healthcare system is "stretched to the limit" and "aggressive lockdowns" - like the one imposed in March last year - in areas with positivity rates over 10 percent are needed to contain the second COVID-19 wave.

India's positivity rate, the percentage of people who test positive out of all of the tests done, stood at 24.46 percent this morning.