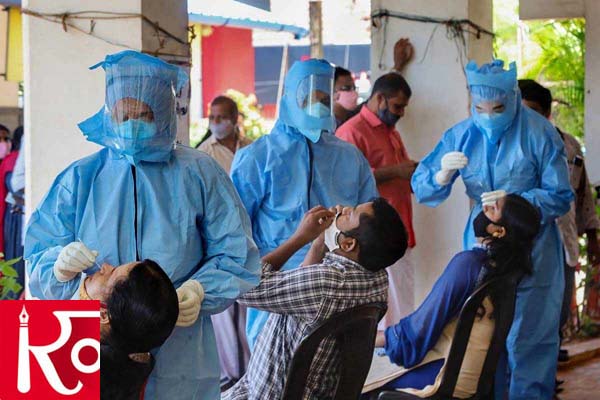 India on Thursday reported 4,12,262 new Covid-19 cases and 3,980 deaths in the last 24 hours, according to the Union Ministry of Health and Family Welfare. The country's tally has now surged past the 2.1 crore mark. Maximum casualties were reported in Maharashtra (920), followed by Uttar Pradesh with 353 deaths.

Assam, West Bengal, Odisha, Bihar, and Jharkhand have seen a rise in both the number of daily cases and mortality, indicating the "pandemic is moving eastwards", the Union Health Ministry said after a review meeting on Wednesday.

Twelve states, including Maharashtra, Karnataka, Kerala, and Uttar Pradesh, have more than a lakh active COVID-19 cases each, according to the government. Thirty districts are showing a continued rise in the number of cases for the past two weeks. Ten of these are in Kerala, seven in Andhra Pradesh, three in Karnataka, and one in Tamil Nadu, it said.

Maharashtra, the worst-hit state since last year, on Wednesday reported a record 920 new Covid deaths and over 57,000 new cases. Capital Mumbai reported 3,879 new cases and 77 deaths while Pune logged 9,084 cases and 93 deaths. The state currently has 6.41 lakh active cases.Karnataka on Wednesday reported its single-largest spike (more than 50,000 cases) since the start of the pandemic -- nearly half of them in capital Bengaluru.

India accounted for 46% of global cases and 25% of global deaths reported in the past week, the World Health Organization said on Wednesday.

"Unless the world steps up and helps India now, there will be reverberations across the region and the world in terms of virus-related deaths, virus mutations, and supply delays," UNICEF Executive Director Henrietta Fore said on Tuesday.

Experts have warned India must prepare for a third wave. "Phase 3 is inevitable given the high levels of circulating virus. But it is not clear on what timescale this phase 3 will occur. We should prepare for new waves," K Vijay Raghavan, the government's principal scientific advisor, told a news conference on Wednesday.

Over 16.24 crore COVID-19 vaccine doses have been administered in the country so far. More than 2.3 lakh beneficiaries of age group 18-44 Vaccinated in the last 24 hours.

US President Joe Biden's administration has announced support for a global waiver plan on patent protections for COVID-19 vaccines moved by India within the World Trade Organization.The pandemic has claimed over 3.2 million lives worldwide since it first emerged in late 2019.India had become the first country in the world to register over 4 lakh cases in a single day on April 30, when it reported 4.08 lakh infections.

On Wednesday, reeling under the second wave of Covid, Karnataka saw new cases breach the 50,000 marks, including 23,106 in Bengaluru.