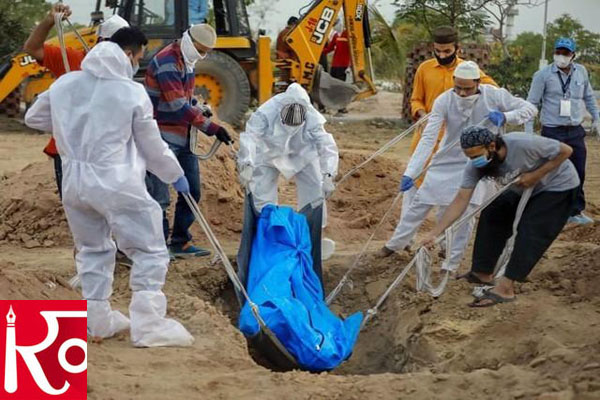 More than 25 lakh Covid cases have been reported and over 32,000 patients have died in the country in a week (since May 11). The country has been recording over 3,000 deaths since April 28. However, yesterday, India recorded less than 3 lakh cases for the first time since April 21.Prime Minister Narendra Modi on Monday interacted with a group of doctors from across the country to discuss the Covid situation. Several challenges of oxygen production and supply are being overcome, the Prime Minister said, thanking the medical fraternity, an official statement said.

With a large number of patients undergoing treatment in 'home isolation, the Prime Minister told the doctors that the treatment should be "SOP-driven".
India will have over 51 crore vaccines by July, Health Minister Harsh Vardhan said yesterday evening as shortage of doses hampers the inoculation drive. "Continuous efforts are being made to increase production and availability of vaccines to further accelerate the world's #LargestVaccineDrive. (sic)," Dr. Harsh Vardhan tweeted.

The government has dropped convalescent plasma therapy for Covid patients from its list. The national Covid task force decided as the experimental procedure was found to be ineffective in reducing the progression of the disease or fatalities.

India recorded a decline of nearly 1 lakh in its active caseload in the last 24 hours, Health Minister said on Monday evening. The country has a total of 33,53,765 active cases, official data this morning showed. Delhi recorded less than 5,000 fresh Covid cases for the first time since April 5.

The number of bleeding and clotting events following a Covid vaccine injection in India - of which 26 have been identified - are "minuscule" and "in line with the expected number of diagnoses", a panel on AEFI (adverse events following immunization) told the Union Health Ministry Monday afternoon.

The government on Monday released a new anti-Covid drug. "It holds the potential to significantly reduce recovery time and dependency on supplementary oxygen among patients," the Health Minister said.

A total of nearly 1,000 doctors across India have lost their lives due to Covid so far, according to the Indian Medical Association. Five months into India's vaccination drive, only 66 percent of India's healthcare workers have been fully vaccinated.

Expressing concern over the healthcare facilities in Uttar Pradesh's small cities and villages, the Allahabad High Court on Monday said it seems as if the entire system is "at God's mercy".