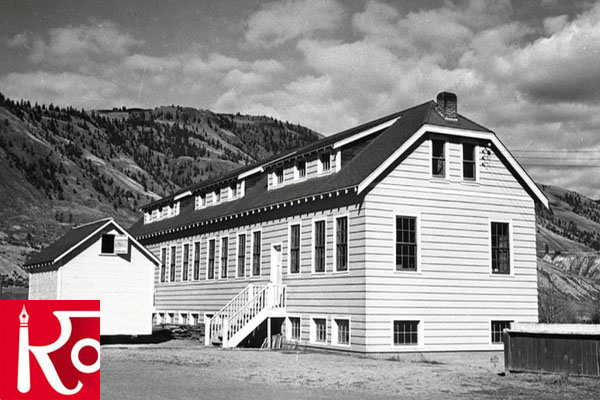 The remains of 215 Indigenous children, including some as young as 3, have been found on the grounds of a former residential school in British Columbia — a grim discovery from one of the darkest chapters of Canadian history, and one that an Indigenous leader called “an unthinkable loss.” The children were students at the Kamloops Indian Residential School in British Columbia that closed in 1978.

Chief Rosanne Casimir of the Tk’emlúps te Secwépemc said in a news release Thursday evening that the “stark truth of the preliminary findings” was unearthed last weekend with the help of a ground-penetrating radar specialist who surveyed the site of what was once the Kamloops Indian Residential School.

The First Nation is working with museum specialists and the coroner's office to establish the causes and timings of the deaths, which are not currently known.

Rosanne Casimir, the chief of the community in British Columbia's city of Kamloops, said the preliminary finding represented an unthinkable loss that was never documented by the school's administrators.

Canada's residential schools were compulsory boarding schools run by the government and religious authorities during the 19th and 20th Centuries to forcibly assimilate indigenous youth.
“We had a knowing in our community that we were able to verify,” Casimir said. “To our knowledge, these missing children are undocumented deaths.”

She said it’s possible more remains could be discovered. The First Nation hopes to complete preliminary findings by mid-June.

Perry Bellegarde, the national chief of the Assembly of First Nations, said on Twitter that “while it is not new to find graves at former residential schools in Canada, it’s always crushing to have that chapter’s wounds exposed.”

Canadian Prime Minister Justin Trudeau said the discovery of the remains “breaks my heart.”“It is a painful reminder of that dark and shameful chapter of our country’s history,” Trudeau tweeted. “I am thinking about everyone affected by this distressing news.”

From 1883 to 1996, nearly 150,000 Indigenous children were separated from their families, often by force, and sent to the government-funded, church-run schools in an attempt to assimilate them. There, many faced neglect and physical and sexual abuse. Speaking Indigenous languages and practicing their traditions were forbidden.

For many, the schools have left lasting scars and trauma that has been passed down from one generation to the next. Canada’s Truth and Reconciliation Commission concluded in its 2015 report that what happened at the schools constituted “cultural genocide.”
Thousands of Canada’s indigenous children died in church-run boarding schools.
Where are they buried?

It also identified at least 3,200 students who died at the schools during that time — a rate that was far higher than for students elsewhere in Canada — though it said that the figure was probably greater and merited further investigation. It has since revised that number up to more than 4,100 children.

Students at residential schools often died of illnesses such as tuberculosis, which spread quickly in cramped and unsanitary living quarters and because the children were often malnourished. Others died by suicide, in fires, in accidents while enduring hard labor, or by freezing to death while trying to escape.

Terry Teegee, the regional chief of British Columbia's Assembly of First Nations, called finding such gravesites "urgent work" that "refreshes the grief and loss" of communities in the region.

Those views were echoed by other indigenous groups, including the First Nations Health Authority (FNHA).

"That this situation exists is sadly not a surprise and illustrates the damaging and lasting impacts that the residential school system continues to have on First Nations people, their families, and communities,'' its CEO Richard Jock wrote in a statement.

Officials working to find the graves and to compile a register of the children who died at the schools told The Washington Post in 2018 that a lack of resources and missing documents were impeding progress, raising fears that unmarked graves could be destroyed.

The 2015 report said that school records were often destroyed. In some cases, school officials failed to note the names of the students who died, the cause of death or to report the deaths to the parents. Those who died were sometimes buried on school grounds, in part because the schools were long distances from Indigenous communities.

The Kamloops Indian Residential School, the largest in the residential school system overseen by the Department of Indian Affairs, was set up in 1890 under the administration of the Roman Catholic Church. It operated as a school and, later, as a residence for students, for more than eight decades, shutting down in 1978.


In 1927, a medical health officer visited the school at the request of the principal, according to the Truth and Reconciliation Commission’s report. He found that a recreation room for younger boys was “most unsanitary” and had contributed to “numerous infections, colds, bronchitis, and pneumonia during the past winter.”

The outside toilets, the inspector said, were “a distinct menace to the health of the children” and should be destroyed.

The commission also cited statements from George Manuel, a student at the school in the 1920s. He recalled being forced to speak English and having been called “a heathen” because of his grandfather.

Manuel had one enduring memory.

“Every Indian student smelled of hunger,” he said.
What were residential schools?

From about 1863 to 1998, more than 150,000 indigenous children were taken from their families and placed in these schools.
The children were often not allowed to speak their language or to practice their culture, and many were mistreated and abused.

A commission launched in 2008 to document the impacts of this system found that large numbers of indigenous children never returned to their home communities.
The landmark Truth and Reconciliation report, released in 2015, said the policy amounted to "cultural genocide".

Canada Prime Minister Justin Trudeau said on Monday it is not an isolated incident that over 200 children were found buried at a former Indigenous residential school.

Mr. Trudeau’s comments come as Indigenous leaders are calling for an examination of every former residential school site — institutions that held children taken from families across the nation.

“As Prime Minister, I am appalled by the shameful policy that stole Indigenous children from their communities,” Mr. Trudeau said.

“Sadly, this is not an exception or an isolated incident,” he said. “We’re not going to hide from that. We have to acknowledge the truth. Residential schools were a reality — a tragedy that existed here, in our country, and we have to own up to it. Kids were taken from their families, returned damaged or not returned at all.”

Mr. Trudeau said he’ll be talking to his ministers about further things his government needs to do to support survivors and the community. Flags at all federal buildings are at half-staff.

“This is not a surprise. This is a reality of residential schools,” Mr. Singh said.


(Except for the headline, this story has not been edited by KHASKHABAR staff)