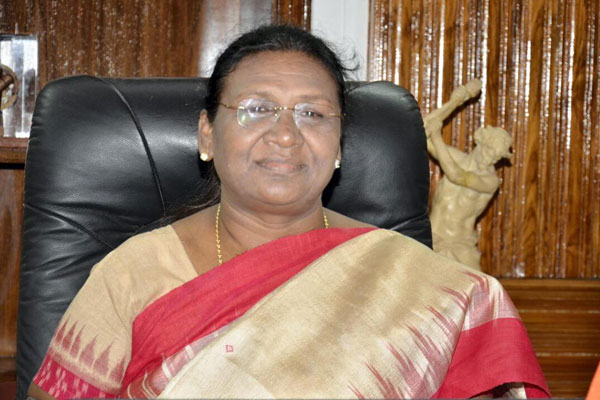 
Present President of India Mrs. Droupadi Murmu was born on 20 June 1958, Baidaposi area of Rairangpur, Odisha. She was from a Santali family. Her father and grandfather were traditional heads of the village council. She is an Arts graduate from Rama Devi Women’s College.
She was married with Mr. Shyam Charan Murmu, he was a banker with whom she had two sons and a daughter. In time span of seven years, from 2009 to 2016 her husband, both sons, her mother and a brother all died.
From 1979 to 1983, she worked as a junior assistant at the Irrigation Department of the Government of Odisha. Then she worked as a school teacher at the Sri Aurobindo Integral Education Centre at Rairangpur. She used to teach Hindi, Odia, Maths and Geography there. Later she joined BJP in Rairangpur and in 1997 she was elected as the Councillor of Rairangpur Village Panchayat. She won year 2000’s Odisha Legislative Assembly election from Rairangpur Assembly constituency and served two terms in the Odisha Legislative Assembly between 2000 and 2009. During the BJP and BJD coalition government in Odisha, she was the Minister of State with Independent Charge for Commerce and Transportation from March 6, 2000, to August 6, 2002, and Fisheries and Animal Resources Development from August 6, 2002, to May 16, 2004. In 2009, she lost the Lok Sabha election from Mayurbhanj Lok Sabha constituency as the BJD and BJP alliance had ended.
She was sworn in as the Governor of Jharkhand on 18 May 2015, she was the first woman to hold the position.The BJP was in power in the Jharkhand Government for most of her six-year tenure as a governor and was also in power in the Union Government throughout her tenure. Ratan Tirkey, a former BJP politician and activist, said that Murmu had not done enough to make sure that the self-governance rights granted to tribal communities were properly implemented. These rights were granted under the Fifth Schedule and the Panchayats (Extension to Scheduled Areas) Act, 1996 or PESA. Tirkey said, "Despite several requests, the then governor never exercised her powers to implement the Fifth Schedule provisions and PESA in letter and spirit”. Her six-year tenure as Governor began in May 2015 and ended in July 2021.
In June 2022, the BJP nominated Murmu as the National Democratic Alliance (NDA)'s candidate for President of India for the 2022 election the following month. Yashwant Sinha, was nominated as the candidate for President by the opposition parties. During her election campaign, Murmu visited various states seeking support for her candidature. Several opposition parties like BJD, YSRCP, JMM, BSP, SS, and JD(S) among others had announced support for her candidature prior to polling. On 21 July 2022, Murmu secured a clear majority in the 2022 Presidential election defeating common opposition candidate Yashwant Sinha with 676,803 electoral votes (64.03% of total) in 21 of the 28 states (including in the union territory of Puducherry) to become the 15th President of India. She was elected as the President of India and assumed office on 25 July 2022. She took oath of office on the Central Hall of Parliament by the Chief Justice N. V. Raman.
And, now decoding the heading, she is first president elected from a tribal community, she is second female president after Indra Gandhi and she is 15th present president of India.