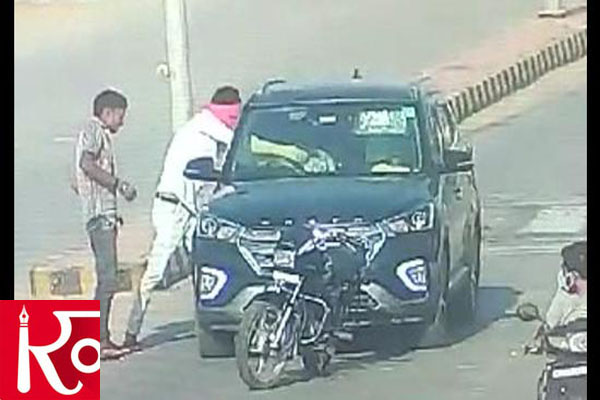 A doctor couple in Rajasthan's Bharatpur was shot dead by two people on a bike at a busy crossing in the city on Friday. The incident was captured in chilling CCTV footage.

The couple was arrested in connection with the murder of 25-year-old woman Deepa Gurjar and her six-year-old son in November 2019 and was out on bail.

The two men, who stopped and shot at a doctor couple traveling in their car in the heart of Rajasthan’s Bharatpur, have been identified, police said, according to news agency ANI on Saturday. Dr. Sudeep Gupta and his wife Dr. Seema Gupta were shot five times and they died on the spot on Friday afternoon.

"We have identified the accused. Investigation revealed that one of the accused is the brother of the 2019 incident's victim, who was murdered. Search is underway," a police official was quoted as saying by ANI.

The police official was referring to the murder of a 25-year-old woman Deepa Gurjar and her six-year-old son in November 2019. The couple was arrested in connection with the case and was out on bail. Police had then said the woman had an affair with Dr. Sudeep Gupta. Police initially arrested his wife for the double murder and later arrested Dr. Sudeep Gupta for conspiracy.

According to news agency PTI, Bharatpur’s inspector general of police Prasanna Kumar Khamesra said one of the attackers is Anuj Gurjar, the brother of Deepa Gurjar, and that he was accompanied by Mahesh, a friend from Dholpur. Khamesra said they were killed to avenge Deepa Gurjar’s murder, according to reports.

The incident took place at 4:45 in the evening. The couple was overtaken by two men on a bike at a crossing, stopped them at Bharatpur’s Neemda Gate area, blocked their compact sports utility vehicle, and shot at them. The crime was captured by a traffic camera and showed the pillion rider, who had his face covered in a pink handwoven towel, walking up to Dr. Sudeep, pulling out his weapon and shooting at him through the window on the driver’s side of the vehicle.

According to the police, the first shot appeared to have hit Dr. Sudeep Gupta in the head. The gunman fired at least three rounds of shots in quick succession at Dr. Seema Gupta, sitting on the passenger’s seat next to her husband.