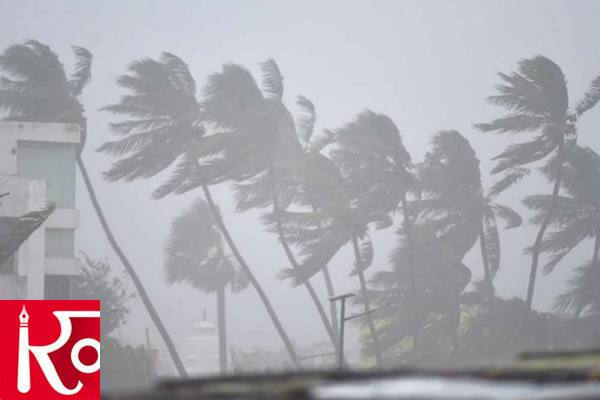 According to the IMD (India Meteorological Department), the depression will intensify into a cyclonic storm over the next 12 hours. "Deep Depression intensified into a Cyclonic Storm "Tauktae" (pronounced as Tau'Te) over Lakshadweep area and adjoining southeast and the east-central the Arabian Sea: Cyclone watch for south Gujarat and Diu coasts", informed IMD in a tweet.

Earlier, the IMD had informed that this cyclone will hit the Gujarat coast by May 18 morning."Deep Depression over Lakshadweep area and adjoining southeast and the east-central Arabian Sea about 55 km north-northwest of Amini Divi. To intensify into a Cyclonic Storm during the next 12 hours. To move north-northwestwards and reach near Gujarat coast by 18th May morning", tweeted IMD.

Cyclonic storm Tauktae, which is likely to intensify into a "severe cyclonic storm" within 12 hours, may hit the Gujarat coast by Tuesday, the weather office has said. Gujarat and Diu coasts are under a cyclone watch. This is the first cyclonic storm this year as India fights a deadly second wave of Covid, which has led to a frightening surge in the country's caseload over the last two months.

The cyclone is likely to intensify further into a "very severe cyclonic storm" in the next 24 hours. It is expected to cross the Gujarat coast between Porbandar and Naliya on Tuesday afternoon. More than 50 teams of the NDRF (National Disaster Response Force) are on duty in five states - Kerala, Karnataka, Tamil Nadu, Gujarat, and Maharashtra.

Very heavy to extremely heavy rainfall "causing flash floods and landslides" over the coastal districts of Kerala, Karnataka, and Goa till Sunday and Saurashtra, Kutch in Gujarat on Tuesday and Wednesday is expected, the India Meteorological Department has said.

Maharashtra Chief Minister Uddhav Thackeray has ordered officials to be vigilant and well equipped especially near coastal areas, given Cyclone Tauktae.
In a tweet by the Maharashtra CMO, it informed, "In a meeting regarding Cyclone Tauktae, CM Uddhav Thackeray directed District Administration, Divisional Commissioners and District Collectors to be vigilant and well equipped especially in coastal areas of Palghar, Raigad, Ratnagiri, and Sindhudurg." Cyclone Tauktae near Kochi is likely to intensify into a cyclonic storm by Saturday morning, informed the Indian navy on Friday.

Prime Minister Narendra Modi will hold a review meeting this evening.
Red and orange alerts have been sounded in various parts. Low-lying areas of the Islands of Lakshadweep are likely to get flooded.
Fishermen have been asked to avoid heading to the Arabian Sea till Tuesday, tourism activities have been restricted and necessary precautions have been advised for naval operations in anticipation of rough sea.

The cyclone is likely to cause rain - of varying intensity -in parts of Tamil Nadu and Rajasthan too.
Indian Navy's ships aircraft, helicopters, diving, and disaster relief teams are on standby for "rendering full support to state administrations as the cyclonic storm approaches western coasts," the spokesperson has asserted.

Deep depression that formed over the Arabian Sea near Lakshwadeep intensified overnight into a Cyclonic Storm "Tauktae" (pronounced as Tau'Te), per an official statement from the weather office.

While Kerala is not in the predicted path of the cyclone, the state government said it is prepared as heavy rains, strong winds, and strong sea gusts are expected till Sunday.
Cyclonic Storm "Tauktae" (pronounced as Tau'Te) over east-central and adjoining the southeast Arabian Sea: Cyclone Alert for Gujarat & Diu coasts (Yellow Message)

"We should exercise utmost caution in districts and adjoining districts where the IMD has issued a Red and Orange Alert. The cyclone is developing and moving faster than expected. It is likely to move north from the Kerala coast by tomorrow. The northern districts of Kannur and Kasaragod are most likely to be affected by the winds. Therefore, it is important to be prepared for the dangers of strong winds."

More than 300 people have been relocated from disaster-prone areas to relief camps in the state capital Thiruvananthapuram, one of the areas where a red alert has been issued.

In a tweet by the Spokesperson of the Indian Navy, it informed, "#CycloneTauktae Deep depression 240 Nm NW off Kochi on 14th evening very likely to intensify into a cyclonic storm Tauktae by 15th morning."

Indian Navy assured full support to State administrations as Cyclonic Storm Tauktae approaches the Western Coast of India.
Acting on the India Meteorological Department's (IMD) warning to fishermen in Kerala over a cyclonic storm prediction, the State Disaster Management Authority on Thursday banned fishing on the coast till further notice.

"About 318 buildings have been set up in different parts of the district to open relief camps in case more people need to be relocated," Thiruvananthapuram district collector Navjot Khosa was quoted.

The IMD has issued a warning for fishermen to not venture into the sea till May 17.On December 3, 2020, cyclone Burevi made landfall in Kerala and adjoining areas.