Amazing! A delivery boy rides horse amid snowfall to drop off order 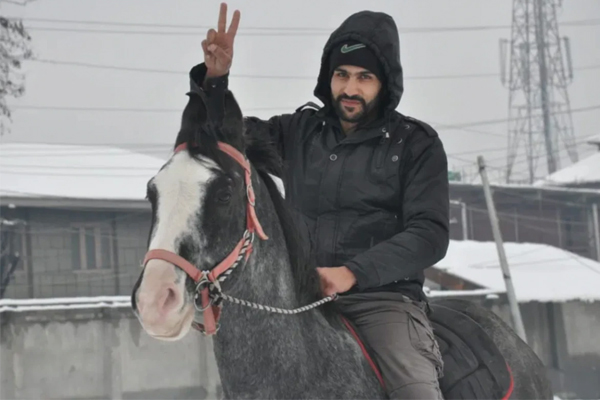 In Srinagar, an Amazon delivery executive was seen riding a horse to drop off orders. A video that has gone viral on social media shows the unidentified man delivering parcels on horseback in Srinagar. In a video, the delivery person was filmed travelling on horseback to deliver packages as roads were snowed under. The unique delivery came to light after photojournalist Umar Ganie tweeted the video.

In the clip tweeted by photojournalist Umar Ganie, the delivery executive was seen riding a horse amid snowfall in Srinagar. Moments later, he got off the horse and handed over the parcel to a man. The executive also clicked a picture of the parcel after delivering it and thereafter, went on his way on horseback. "Amazon delivery innovation," Umar Ganie said in the caption of his post.

The video has gone viral on social media with over 2,000 likes and several retweets. Several users applauded the delivery executive for his efforts. The 22-year-old delivery man, Shiraz Ali Khan, says he did it after realising that some of the customers were desperately in need of the parcels.

"We were getting constant calls from these customers. The parcels were of medical equipment, baby food and study material. There was no way we could reach there on our 2 wheelers so I thought of taking my horse out. I spoke to my supervisor who allowed me to do this after taking all the safety measures into consideration," says Shiraz Ali Khan, a resident of old city Srinagar told.